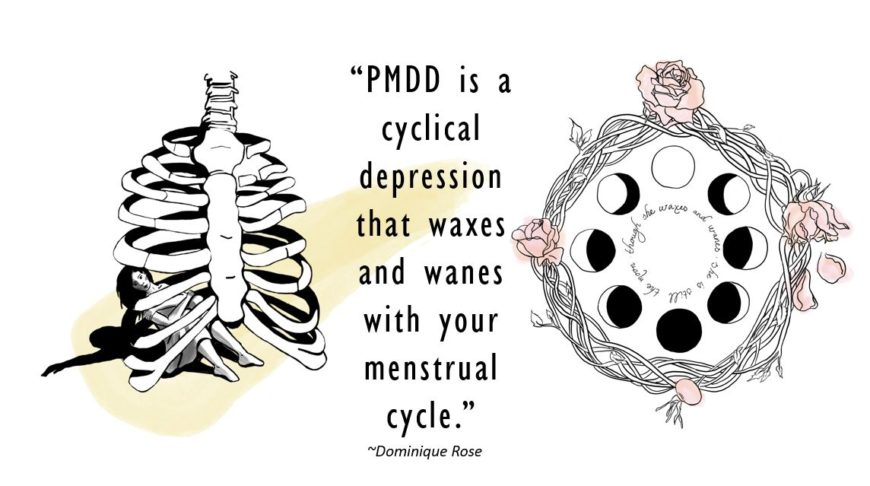 At first, when the down days come, they are almost comforting in their inevitability. A thick, familiar blanket to sink into. I bury beneath them and block out the bombardment of sounds and feelings of an ordinary life, let my skin go numb.

A few days in and the mustiness of that blanket is no longer pleasant. I’m ready to break free, but the decision is taken from me. I cannot find the edges of that damp, clinging depression. I tear at my face, fighting for all those times I’ve breathed fresh love, joy, and curiosity, and remain piteously tangled. Cocooned in an invisible solitude.

I’m given a blinkered view of the world through the woven pinpricks in the cloth. The light it lets in reveals my everyday failures and the hurt of my loved ones as they search for me even as I stand before them.

Their touch scrapes my skin through my woolen fog. I try not to recoil. I long to be held. I pull away so that I will not scream. I protect my family from lashing claws and splintering teeth. The wool is the fur in my coat as the moon transforms me from human to wounded beast.

Anxiety and I have been close since I was a child. I have experienced social anxiety, general anxiety, suicidal thoughts, and depression of both the postnatal and garden-variety. If mental disorders were trading cards, I would be the envy of the playground, but I was hoping my album was full by now. I had even managed to trade a few cards away, whilst others had faded from exposure to the sun and rain.

If mental disorders were trading cards, I would be the envy of the playground, but I was hoping my album was full by now.

So, when a new card fell into my hands, it took some time to register its appearance. I would pick it up from time to time and turn it between my fingers, but it was a couple of years before I worked out what it said on its back and longer still to decipher what that actually meant. Now that I know its name, I don’t know if it belongs in my album at all. So, I’m just going to slap it down onto the table:

If you’ve never heard of it before, you’re in good company. Premenstrual Dysphoric Disorder (or PMDD for those of us who can’t accurately type “Dysphoric”) is only a very recent addition to the Diagnostic and Statistical Manual of Mental Disorders. To simplify it into something that would make a doctor cringe: PMDD is a cyclical depression that waxes and wanes with your menstrual cycle. It is triggered by wayward neurotransmitters that decide to press the Big Red Button on the part of your brain that controls your learning, sleep, and mood.

It should come as no surprise then, that the symptoms of PMDD can include poor concentration, low energy, trouble sleeping, and irritability. That’s not such a big deal, right? It sounds a lot like regular old PMS and, if the movies are anything to go by, PMS is one of those hilarious women’s problems that makes us go a bit whacky in the head. Laugh-a-minute material.

Only, if PMDD was going to star in anything, it would be a snuff film, not a rom-com. PMDD turns poor concentration into anxiety; low energy into depression; trouble sleeping into insomnia; and irritability into social withdrawal, despair and suicidal thoughts. The symptoms come on suddenly, about two weeks before the end of a woman’s menstrual cycle, and they end just as abruptly with the arrival of her period. Women with PMDD freaking love getting their period.

In my case, I become depressed and listless. My anxiety ramps up an extra few knots. I feel hopeless, worthless, toxic, overwhelmed. I don’t want to be around other people. I don’t want to make eye contact. I don’t want to be touched. There are moments when working out what to make my children for lunch feels as stressful as tightrope walking across a chasm. And it is a chasm. In those moments, the distance between knowing you need to do something and actually doing it can only be measured in shame.

PMDD puts up its biggest fight in the final few days of my cycle and I am angry, bitter, betrayed. Snapping at anyone who comes too near. And when my body finally harmonizes again, on those precious days that I can feel whole and happy, there is always an undercurrent of dread knowing that the good days will slip away too quickly and that next time I might push the people I love too far.

By the time I made an appointment with my GP, I had been suffering the symptoms of PMDD for at least three years. Most likely, it has been lurking inside me since sometime between the birth of my first or second child, but my life was in such chaos at that time that it slipped inside me undetected.

There is always an undercurrent of dread knowing that the good days will slip away too quickly and that next time I might push the people I love too far.

It was only recently — when the symptoms started to impact upon my relationship — that I began to wonder if something was up. I would flip between madly-in-love and cold-and-distant so frequently that I became mistrustful of my own emotions. I felt every emotion in full clarity and with one hundred percent certainty, but what I felt with such confidence was always contrary and inconsistent. It was infuriating and terrifying. I had two people fighting it out beneath my flesh: my normal self who happily pottered about the house with a chest full of gratitude; and my PMDD self who wanted to live as a hermit in the basement of an abandoned asylum. 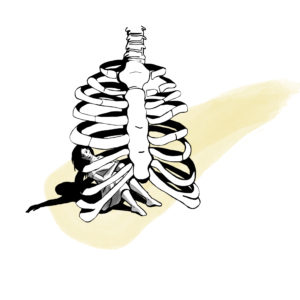 *Throughout April 2018, the writer and artist will donate 100% of proceeds from the sale of this print to the Gia Allemand Foundation for PMDD.

Eventually, I grew weary of Googling “intermittent depression” at four in the morning and started to track the connection between my menstrual cycle and my mood instead. I loaded my phone with calendar apps and, over time, the data I input struck them all in half. The moon phases, my menstrual cycle, and my mood chart; each slotted neatly into the rhythm of the other. I switched to Googling “period + depression” and called my GP.

From the corner of my eye, I watched the student doctor’s face ripple as my GP explained PMDD to me. I could feel him resisting the urge the chortle. I wondered if this was how women of old felt when they were diagnosed with Hysteria and somehow resisted kicking him in the shins. My wonderful GP treated me with all of the concern that the disorder deserves, however. He spread my options across the room with a sweep of his hands and raised his thumb. Option one.

“More exercise. It’s proven to help in cases of depression, so the more you can get out and move on your bad days, the better.”

I thought of my most recent bad day and the ensuing struggle to unfurl myself from the fetal position, let alone go for a run. I nodded obediently at my GP and he flicked up his index finger to stand with his thumb. Option two.

“We battle hormones with hormones using the contraceptive pill.”

Having had the pill throw punches at me during my teen years, I had ended up using a copper IUD instead precisely because it does not add any extra hormones to my system. I nodded obediently at my GP and his middle finger joined its companions. Option three.

I wanted to give option three the middle finger myself. My GP sent me home with a script for the mini pill and instructions to come back in three months’ time for a re-evaluation.

In a rush of water, the first pill slithered down my throat and into a belly of mewling, wriggling, newborn hope. Where it dissolved, a gentle hush was left behind. The next pill arrived and the next and the hush roiled into a burning silence. Hormones invaded my body like a SWAT team; invisibly and without a sound. Their snipers took out anger and sorrow first, but they were just as ruthless with happiness and contentment. They sauntered through me until every emotion was bleeding out into the gutter with no one left to mourn their loss.

Instead of balancing out my hormones in the second half of my cycle, the pill ensured that I was depressed for the entire month. My precious island of good days had been replaced by an endless horizon of black, storm-ravaged waves. I locked the pills in the cupboard and bailed out, but it was still a full six weeks before I found my version of normal again.

Which leaves me here, sitting at my computer at the beginning of a good day. I have been writing this in stages over the past months, through good days and bad —can anyone even tell? With my personality split asunder, which half is the better writer? Which half the artist? I become a workaholic on my bad days, finding solace only in creation and shielding myself with art and inspiration. Would I be nearly as productive without PMDD?

When I am trying to sort through my knotted thoughts, I find myself returning to analogies of PMDD and the moon. The links between the two are extensive: the cyclical nature; the correlation with the menstrual cycle; the symbolism of madness; the hidden darkness. I tend to focus on the darker aspects of the moon — its distance and the irresistible control it possesses. But then some nights, I lie in bed and see that the full moon has filled up our skylight leaving our bedroom awash with the same light that dinosaurs once roamed beneath. I am forced to remember that, for all of its darkness, the moon is a source of awe with a beauty that is almost painful to try and comprehend, no matter how frequently we are exposed to it. 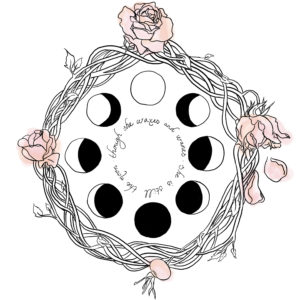 *Throughout April 2018, the writer and artist will donate 100% of proceeds from the sale of this print to the Gia Allemand Foundation for PMDD.

Some years ago, I gave birth to PMDD, yes, but with it came strength, confidence, passion, fire and a creative drive I had never known. I can’t just grit my teeth and ignore the terrible depression, but I’m working to find a gentler path through it. My partner and I talk on my good days about the best ways to help me and speak to me when I don’t want to be helped our spoken to. I’m looking into vitamin supplements, keeping tabs on my triggers, and putting together ‘in case of emergency’ kits of bath bombs, tea, and music. But mostly, I’m reminding myself that the moon is still the moon, whether its face is in the darkness or the light. I may eventually travel down a road paved in antidepressants, but not until I have given myself the chance to embrace both of my halves and love the madness of the moon.

Some years ago, I gave birth to PMDD, yes, but with it came strength, confidence, passion, fire and a creative drive I had never known.

Dominique Rose is an artist that writes about her life and experiences, including her battle with Premenstrual Dysphoric Disorder, on her blog, and sells black and white illustrations and imaginings in her Etsy shop – Inklining.

By The Warrior | Me v PMDD
6
anxietyArtArtistCreativityDepressioninsomniaMoonPMDDPremenstrual Dysphoric Disorder
Me v PMDD, Inc. Values and Mission Statement
“She Used to Be Mine (PMDD)” Cover 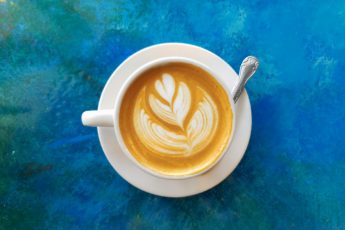 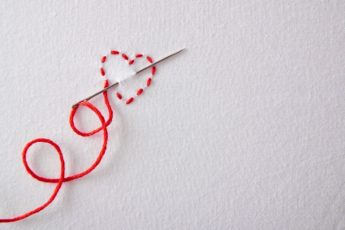